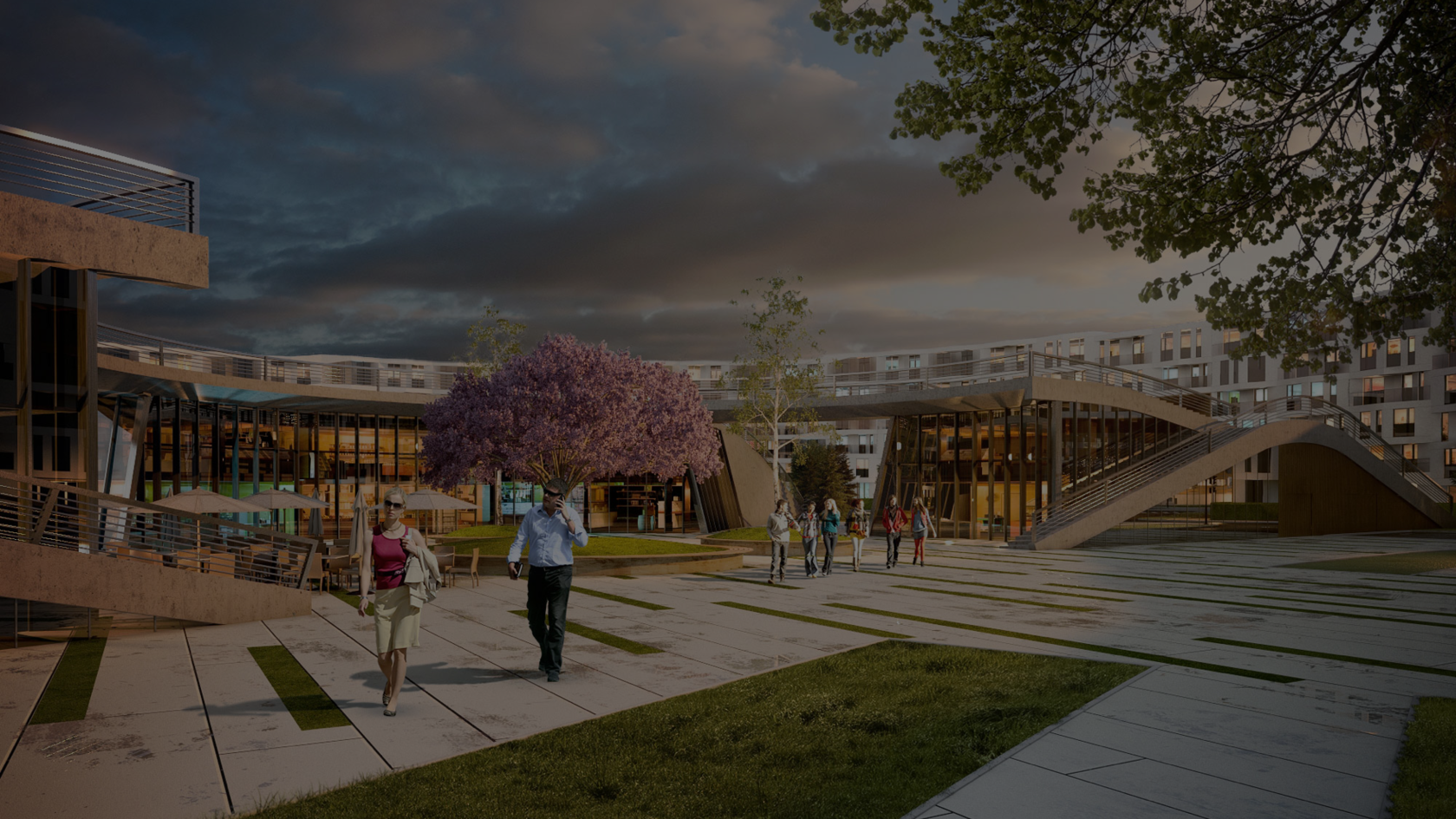 Reservation and apartment rent in Skolkovo

The joint directorate for the management of Skolkovo assets and services is a professional development and management company operating in the territory of the Skolkovo Innovation Сenter and created to ensure the implementation of the master plan for the development of the innovation center.

By that time construction is completed the joint directorate will be managing a broad range of various properties with a total floor area of up to 2.7 million square meters.
TASK
Choice, online reservation and apartment rental payment (flats, townhouses, cottages). Capability to control town services and features.
WHAT WE DID
Front-end and вack-end development

Under otherwise equal conditions (price label, technologies, terms), face-to-face presentation of concept to customer is always an added benefit to the chance of being chosen and a great responsibility. Most of the companies don't pay attention to this, but we did.
Prototype instead of
for statement of work 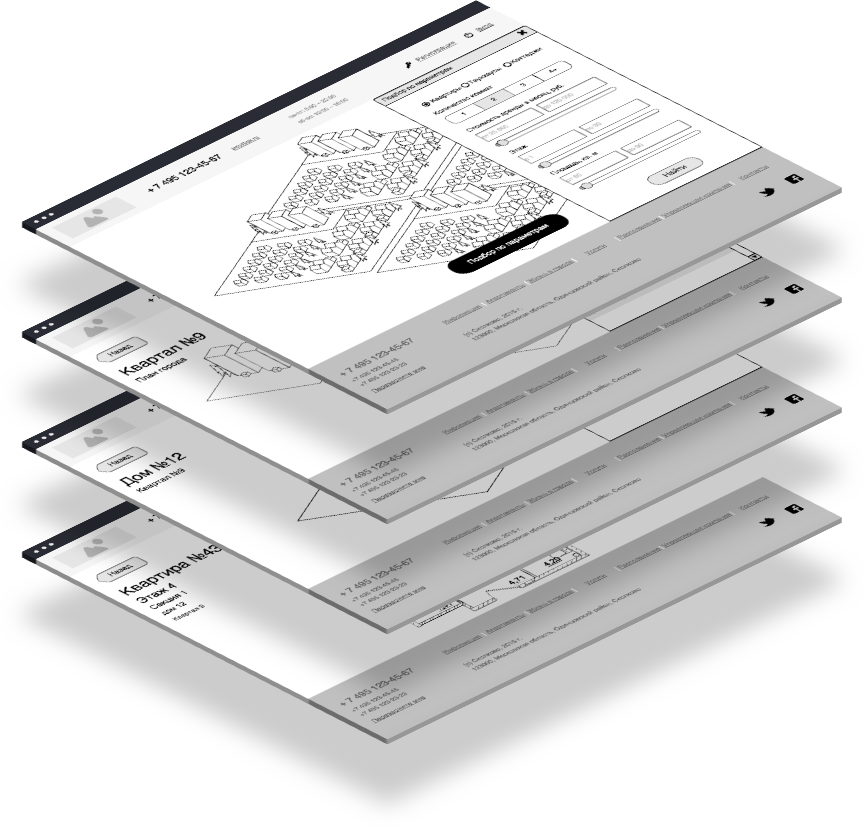 In order for us and the customer to understand the contents and the structure of the website, its functionality and components composition — we project future sections in the form of pages prototypes.

Simultaneous to prototype confirmation we compose a simplyfied statement of work (you can't do without it).

We approve the SOW and start with design!

Design
Even before commencement of works the customer had an understanding how website public section should look like visually — it is a rather widespread scheme among real estate websites, when user step-by-step "falls through" from residential quarter (of the house) to final real estate object (apartments, house, townhouse).
Look at the personal account main page miniature 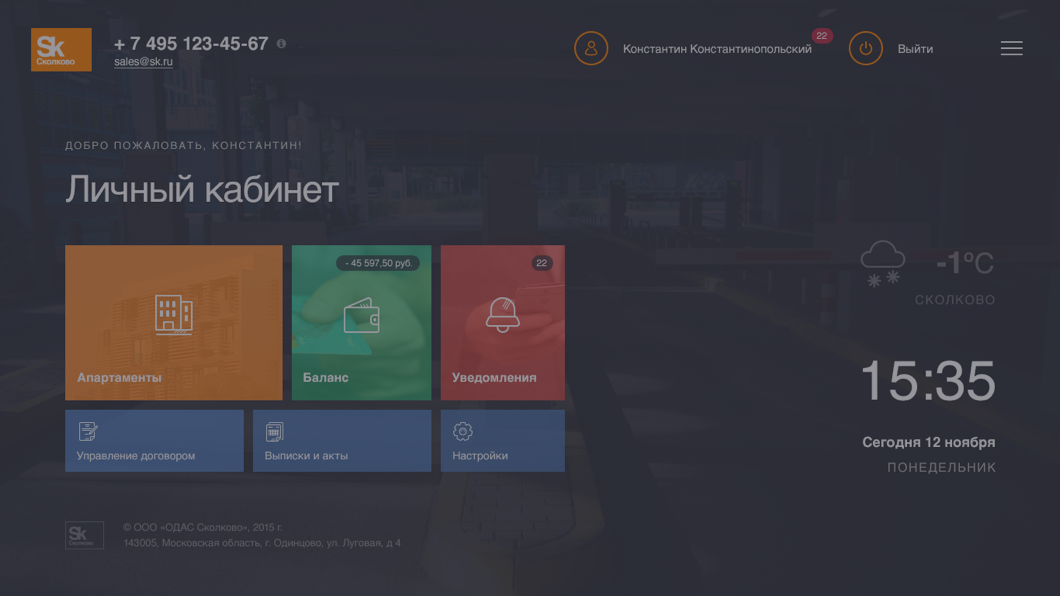 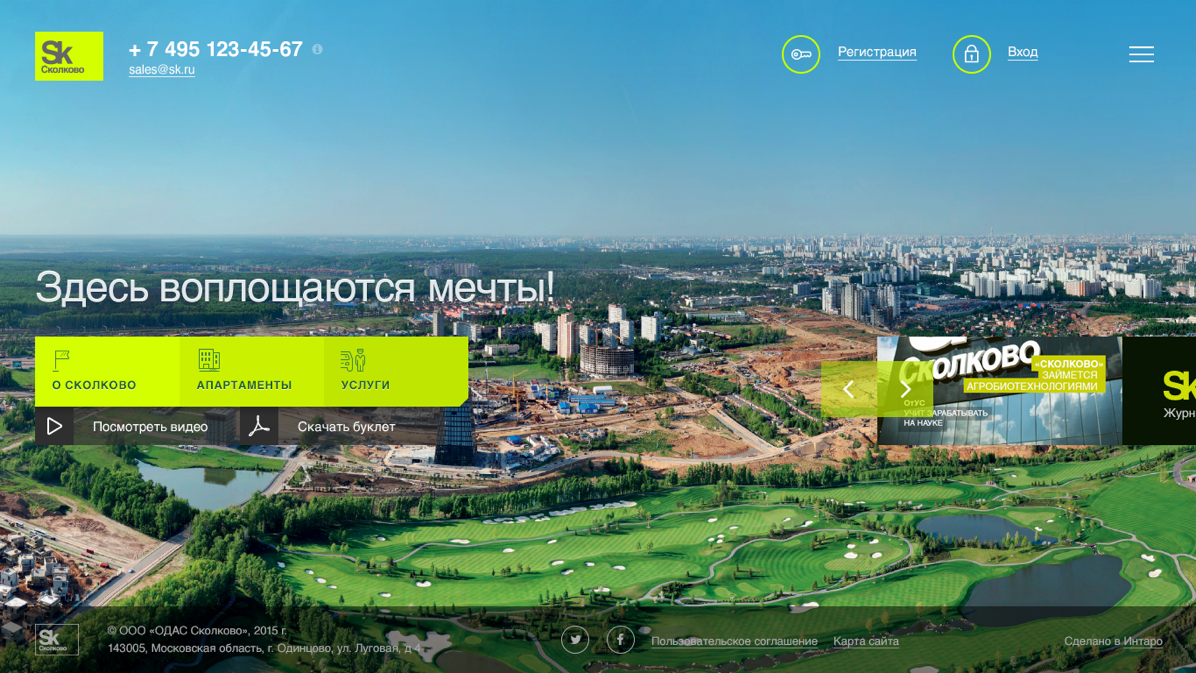 That's why everything was rather certain and clear with public section miniature. We draw in main pages with object renders, provided by the customer.

As a separate thing, we are considering site navigation and workflow structure for mobile versions, since smartphone screens would not allow to make an effective use of the desktop version.

Resident's personal account
In a context of "uncertainty" of the final functionality set and capabilities of real estate and services management we try to make a universal adjustable to scale personal account.

We take into account, that target audience — are young and purposeful people, working in hi-tech sphere, which are constantly on foot. That's why we make personal account available from any user device.

We entertain a posiibility, that real estate can be controlled as by a private individual, as well as by organization (centralized, all the company members real estate).
We make maximum flexible rent and services payment system, providing financial statements on them.
We integrate promo site and main Skolkovo portal feedback functionality to the account. We don't forget about replies to provided services. 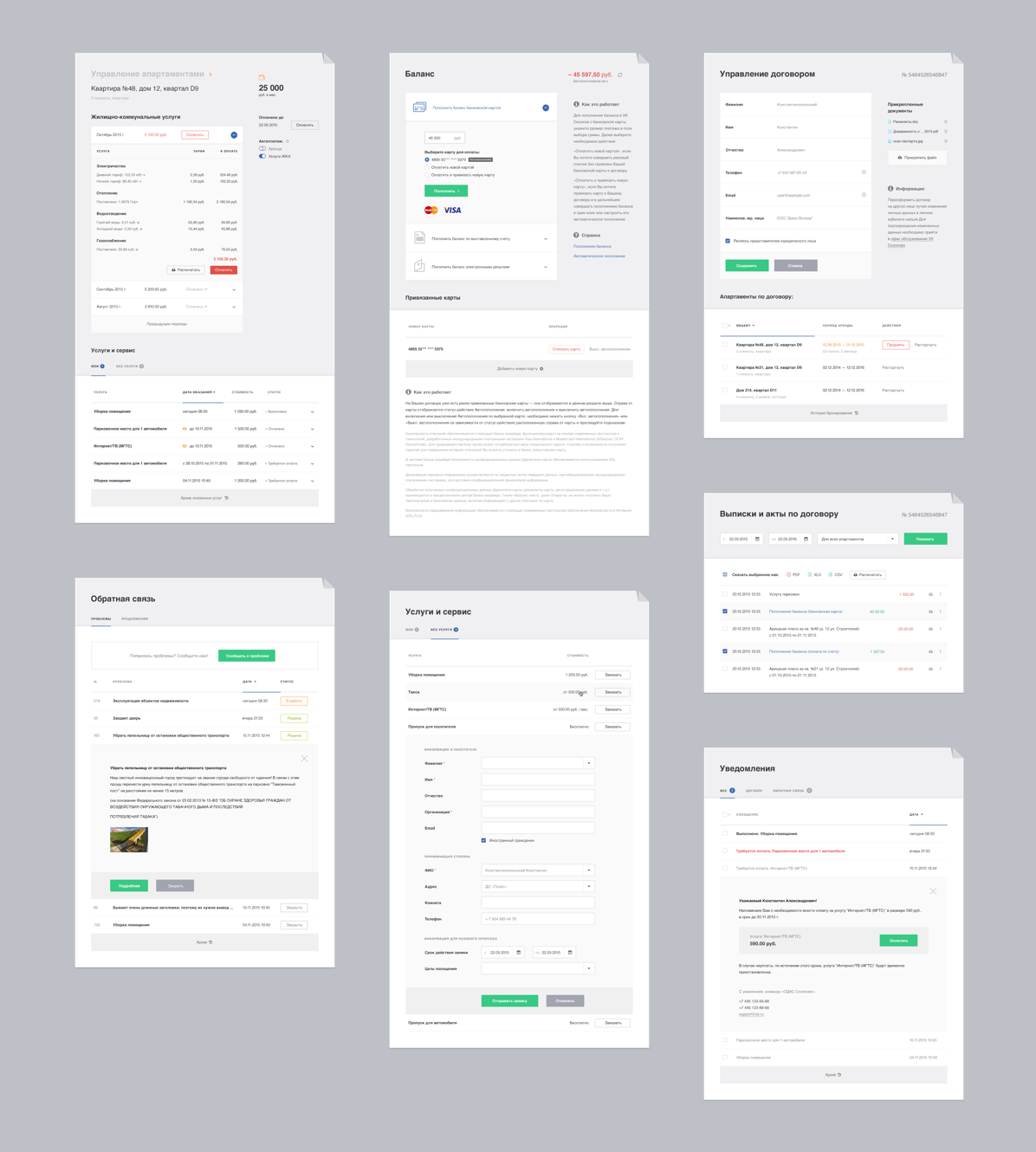 As work over the website is being held constantly and the whole system functionality develops, we make allowances to the personal account, with constant user interface refactoring.
Questions to ordering party
What tasks was the portal aimed to solve?
The "Skolkovo" Innovation Center main information provision — construction status, backend infrastructure, transport availability of the city.

The distinguishing feature of the portal from other real estate websites — is not simply getting information about this or that object or service, but the possibility of reservation and payment.
Julia Martynova
PROJECT MANAGER, UDAS "SKOLKOVO"
Solkovo is an innovation city. What makes portal different from others?
What are your global plans of portal development?
On a global scale we plan to develop the portal and provide information to all territory of "Skolkovo" Innovation Center — on all completed objects and the ones in progress.

Simultaneously to city infrastructure development we plan to increase the number of city utilities, services and events, which will be available for reservation/payment on the portal.

Creation of unified navigation system, allowing convenient and fast orientation on the territory of "Skolkovo" Innovation Center. The system will allow to build a route to any Innovation Center object with full range of transport, incl. walking an bicycle route, including inner object navigation (guidance to object inside the building), and also grants access to all utilities and services provided on the territory of the Innovation Center.
The distinguishing feature of the portal from other real estate websites — is not simply getting information about this or that object or service, but the possibility of reservation and payment.
Questions to the contractor
How was the work on the website organized? What did the interaction with the ordering party look like?
The portal should have been made as an informational resource, using which you could have left as well a request to rent a flat or cottage in the new building city of Skolkovo Innovation Center. In other words it should have been uniting the function of attraction of new lease holders and reputational constituent.
In order to determine definite waymarks of the project and speak the same language with the ordering party, we developed a detailed prototype and made the SOW on it's basis.
Helen Pugacheva
PROJECT MANAGER, INTARO
As the city was being built (the construction continues at the moment) and at the moment of project start not all residential areas were finished by the real estate developer, the ordering party didn't have a clear vision of how to organize the whole process of renting. They had only general view on it. To clarify business details and specificity we organized meetings several times with ordering party representatives. But mainly, in order to save time, all questions were discussed in online mode via Skype.

In order to determine definite waymarks of the project and speak the same language with the ordering party, we developed a detailed prototype and made the SOW on it's basis. These works took us about 2 months. By that, significant part of time was spent on approving and confirmation of the results by the ordering party side.

As the result, we got a concrete vision of final results instead of bleary outlines as before the beginning, but still for a variety of reasons we didn't get a chance to work out the whole functionality on the SOW stage, so it was decided to think over several questions after first project integration. For example, set of functions of the online account, authorization through "Virtual Skolkovo" AIS (put simply, www.sk.ru Skolkovo website authorization system) and other.

The project software development was based on company accepted agile-methods directly. The project was divided into circuits, for either of which a detailed plan was drawn. During the development process many objections were changed, new objections appeared, that's why the initially written SOW was used more like a reference book, and not like a strict instruction manual, that is, in general, characteristic for agile methods of software development.

Huge portal — is always some kind of an iceberg, where only the top can be seen. Tell more about project architecture.
Huge new progect doesn't appear as an iceberg from the horizon, but grows gradually, accreting new sections.

That's why, in order for the site not to turn to a huge snowball, it's necessary to approach the question of development and implementation of new functionality with a special care.

Several technological solutions are used to maintain these tasks on the project. The website is built on the CMS 1C-Bitrix platform, that allows to lead fast and effective development and implement new functions.

A lot of attention was paid to work with interactive map, where users can find information about different objects on the territory of Skolkovo, and also choose and reserve apartments and services. The map is developed using modern JavaScript libraries, such as: Paper.js и D3.js for forming up and work with map objects, Leaflet for creating convenient scalable map.

The website is closely integrated with the rest of Skolkovo ecosystem: synchronization with inner management system allows to receive actual information about services and apartments availability, and also transfer data collected on the website for processing. Users of the "Virtual Skolkovo" portal may login on the website in one click and use all its capabilities completely.

Taking into account that project work was held by small circuits, we needed to project scalable structure from the very beginning, tha would be friendly to further setting and implementing of new functional capabilities.

What was the most difficult on the project in terms of management?
Collection and consolidation of objectives definitely. I will explain why: from the ordering party side several functional aquirers took part in the project, that could make decisions. In some cases it happened uncoordinately, sometimes decisions contradicted already realized logical circuitry, but it was impossible to cancel or postpone them. Unfortunately, we managed to get the requests acquisition process going only by the end of the first stage. Further work on the project, that is being held at the moment, is built already on more exact communication conditions.

In this case initially well-considered scalable architecture helped us to hold control over the project. That is what Eugene was already talking about. And also usage of flexible agile-methods, which are designed for leading such specifical projects.

As we've got to know the work on the project was held by short circuits. What happeed before such half way deadlines to keep the schedule?
As you know, intensity of fulfillment processes is usually shifted closer to the end of the project/circuit. This project wasn't an exception. To keep initialy confirmed terms we tried to increase team productivity. We recruited additional resources as and when necessary. We reconstructed earlier set task priorities in real time mode taking into account current ordering party and project needs in general.

We are in web-development business since 2007. We rank among Top 100 RuNet web-developers and Top 3 e-shop developers.